Occupy Wal-Mart (2012) is a compilation of essays Norman has published in the Huffington Post, along with updates of the issues and additional commentary. He has written two previous books on the subject:

Slam-Dunking Wal-Mart! How You Can Stop Superstore Sprawl in Your Hometown (1999) and The Case Against Wal-Mart (2004). Find links to order these books below. 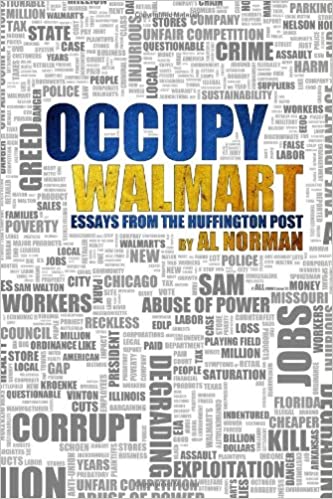 The message of the Occupy movement has moved from Wall Street to Main Street, as all 1% corporations are scrutinized for their irresponsible behavior. And the "Mother of all 1% corporations," according to author Al Norman, is none other than the mightiest retailer of them all, Walmart.

Norman, the chief anti-Walmart activist for 20 years, argues that Walmart is the perfect target for effecting change in the unfair global economy. Walmart, "the most ubiquitous symbol of what has gone awry in corporate America today," is in our neighborhoods. As the 99% become less tolerant of the 1% who make billions by exploiting workers, taxpayers, and shoppers, they long to bring back local citizen control to our hometowns. In such places as Athens, Georgia and Mira Loma, California, groups have begun actions against Walmart and its distribution centers.
Order Now

The book is a call for the preservation of all the qualities we love about hometown America. It is one man's David versus Goliath story. It can also be a road map for your community's fight to keep its downtown businesses and core values.

"Slam-Dunking Wal-Mart" is written in two parts. The first part describes why Wal-Mart, Home Depot and their kin are a threat to small community life in America. The second part gives you a game plan to stop Wal-Mart and other big-box retailers in your home town, much the way Al Norman and other concerned citizens kept Wal-Mart out of Greenfield.
Order Now

The Case Against Wal-Mart

This is a book every American shopper should read before making another trip to Wal-Mart. As Al Norman says, "Friends don't let friends shop at Wal-Mart."

The Case Against Wal-Mart is presented as a legal brief against Wal-Mart with "counts" against the company ranging from its employment practices to its "Made in America" mythology.

Written by Al Norman, the world's foremost expert on and leader of the anti-sprawl movement, The Case Against Wal-Mart calls on consumers to go on a "Wal-Mart diet." Norman says that only a consumer boycott of Wal-Mart will show the company that U.S. citizens disapprove of its business tactics.
Order Now

AFTER BEING REJECTED BY THE DEERFIELD, MA PLANNING BOARD, DOLLAR GENERAL APPEALS…

WILL TRUMP ALLOW ORACLE & WALMART TO INVEST IN TIK TOK? The deadline to ban …

WALMART’S GOING TO THE DOGS. 90 M OF ITS CUSTOMERS HAVE DOGS. You’d be Goofy not…

The strategies written here were produced by Sprawl-Busters in 2006 at the request of the United Food and Commercial Workers (UFCW), mainly for citizen groups that were fighting Walmart. But the tips for fighting unwanted development apply to any project—whether its fighting Dollar General, an Amazon warehouse, or a Home Depot.

Big projects, or small, these BATTLEMART TIPS will help you better understand what you are up against, and how to win your battle.